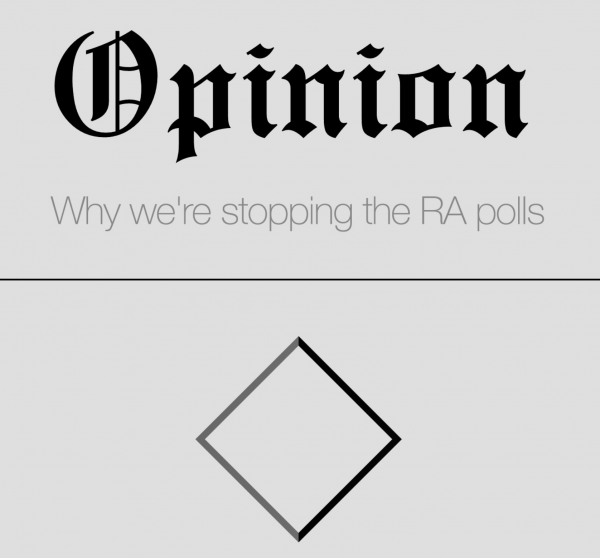 We just found out that electronic music magazine Resident Advisor will not continue their annual polls. Read the corresponding press release below or directly on their site here.
Over the years we felt more and more critical about these polls. We feel there’s nothing really to be added  to RA’s statement. Full support and thank you RA for being open for change.

We’re no longer running the RA polls. Here’s why.

Since Resident Advisor began back in 2001, our mission has remained the same: to support local electronic music scenes and to connect the larger electronic music community. But outside of those core goals, plenty has changed. While remaining completely independent, we’ve grown from a site focused on the scene in Sydney, Australia, into an online magazine, events database and ticketing service with a global following. Today, the decisions we make can affect club culture and electronic music, a world we love and where we hope to be a force for good. It’s with that in mind that we’ve decided to stop running the RA polls.

When the polls started, they filled what we saw as a gap in coverage. Other magazines had been doing similar lists for years, from Mixmag to DJ Mag to Pitchfork, but none covered the music for which RA had become an advocate—the vast tier of electronic music dubbed “underground,” for lack of a better term, a global network of DJs, producers, clubs and labels that were doing amazing things, but that, whatever the size of their cult followings, had not achieved the kind of success that would land them in other lists.

RA held its first top DJs poll in 2006, with voting open only to the site’s contributors. The idea, simply, was to capture the highlights of that year. In 2008, we asked our readers to vote in these polls for the first time, which we’ve done each year since. More than ten years after that first RA poll, the aim has remained the same but the poll—and the scene around it—has changed immeasurably.

The underground, as Michaelangelo Matos put it, is massive. The world RA covers is more professional, more competitive and more lucrative. Over the years, this raised the stakes for the poll considerably. What began as a lighthearted way to praise our favourite artists and toast the year gone by had become something of more serious consequence: an industry index influencing many different parts of club culture, from event lineups to artist fees to the atmosphere of the scene in general (especially at this time of year). Over time, it became our most-read piece of content.

This added responsibility has caused us to reflect on the polls, and to consider whether they are still aligned with our mission and the best interests of the scene. After a great deal of what you might call “soul-searching”—or more specifically, discussion, both internally and with other members of the electronic music community—we decided they are not.

If our goal was to reflect the past year in electronic music, our 2016 DJ and Live Act polls were the culmination of a growing feeling: that the homogeneity of the results didn’t represent the diversity of the scene. Musically, they featured just a portion of the music we cover and that gets played in clubs. But that’s a comparatively trivial point. More pressingly, the DJ and Live Act lists were overwhelmingly dominated by men, mostly from the US and Europe. They didn’t represent the reality of electronic music in 2016, a scene in which countless incredibly talented women play to packed clubs each weekend. To continue running these features would be to diminish the vital contribution they make to electronic music.

It’s also important to remember that dance music is an art form born in queer communities, shaped by people of colour and populated by artists of all genders. But, simply put, this isn’t something you’d know by looking at the recent results of our polls. At best, the lists misrepresented the reality of the scene; at worst, they helped to reinforce some of its harmful power dynamics, which still favour white men above everyone else. This is reason enough to make a change.

On a more basic level, we decided that we don’t want to rank artists in this way. On reflection, to put artists in a list in descending order of perceived quality does a disservice to them, even the ones at the top, and creates an atmosphere of self-interested competition. For this reason, we’ll also be stopping the staff-voted, numerically-ordered polls—that is, top labels, top tracks, top albums and top mixes / compilations / podcasts.

We still believe there’s value in recognising artists who’ve done something remarkable each year, and will continue to do that on an annual basis, but in a much different format that does not aim to replace the polls. Over three features, we will highlight the artists and records from across the scene that we think made a significant contribution to electronic music this year. We’re grateful that you trust us to suggest who or what we think deserves recognition—we’d just now like our year-end coverage to do this in a way that feels healthy and forward-facing. Our coverage should always have a global outlook and draw from the perspectives and backgrounds of all members of our community, from the most famous DJs to weird new music being made in bedrooms.

Ultimately this decision is rooted in something we alluded to at the beginning of this piece. Our staff is made up of people who have dedicated their lives to electronic music. Beyond our roles within RA, we are DJs, producers, promoters and fans, people with dance floor memories that still give us goosebumps. This is a world we love and respect, and which we want to treat with love and respect. At this point in time, ending the polls feels like the best way to do that.