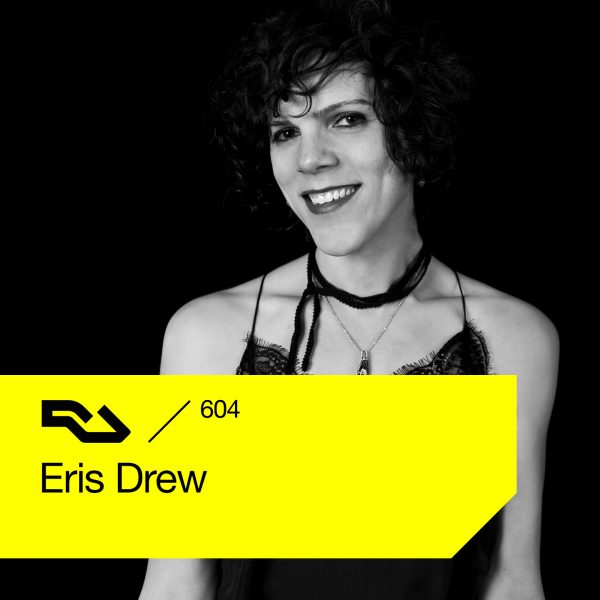 Have you heard about Eris Drew? Well, we haven’t, until recently our good friend Melanie from Her Damit Festival called us and told us about her. We instantly checked some mixtapes on Soundcloud and absolutely fell in love with her sound. A couple of weeks later, and Eris just released a mix on Resident Advisor, accompanied by an insightful interview. Read it below or visit the original article on RA here and check out the mix.

We are looking forward to have Eris over to play for us on June 8th  2018:
BLITZ w/ Eris Drew, Leo Küchler, Sascha Sibler
> Facebook
> Resident Advisor
> Eventim Tickets

23 years ago, Eris Drew had a visionary psychedelic experience that would shape the rest of her life. “My friend named the Motherbeat in 1994 in the moments after a rave, when we experienced all the ambient sound around us as an extension of the party,” she says. “Specifically, she spoke through an air conditioner. I was a closeted femme at the time and in an existential war with my own body. I was completely lost in the culture’s inadequate models of gender. The records I play for people today, a lot of them were my medicine.” Drew’s connection to her theory of the Motherbeat, which she expands on below, has guided her work as a DJ, musician and cofounder of Hugo Ball, the long-running polysexual party at Chicago’s smartbar. Next year, she begins a seriesof all-night Motherbeat parties at Hot Mass in Pittsburgh, with further dates across the US planned for 2018. The series follows Drew’s busiest year as a touring DJ, as she continued to build her reputation through sets at clubs and parties like Club Toilet, Hot Mass, Honey Soundsystem and The Bunker. As is often the case with the Midwest’sbest DJs, clubs in Europe have been slow to catch on to Drew, although next year that’ll change, with shows booked in for OHM and Her Damit Festival in Berlin and Hopeworks in Sheffield.

Reading Drew’s words and seeing her play makes it seem obvious that she’s feeling particularly inspired right now. Her RA podcast draws from two profound DJ experiences she had in 2017, at Honcho Campout in Pennsylvania and Tuf ’till Dawn in Seattle. Drew’s style is at once contemporary and classic, a blend of house and techno shot through with the utopian spirit of rave and a party-rocking emphasis on rhythm.

What have you been up to recently?

During my travels the last few months I have been preparing. Reading everything I can on esoteric religions, lost trans histories and psychedelic shamanism. Spending as much time as possible in nature. All of this to be ready for the First Psychedelic Rite of the Motherbeat, which I am conducting in April with my hyperdimensional friends ??? (adab), Kiernan Laveaux, Sold and Hi-Vis at Hot Mass in Pittsburg.

How and where was the mix recorded?

I recorded the mix in my bedroom studio about an hour outside of Chicago. For it, I employed the used Technics turntables I bought in 1994. They are MKIIs, which have been modified by Ken Paul. The mixer is an Allen & Heath Xone:32 with a Penny & Giles crossfader installed. It is absolutely my favorite crossfader because it is smooth and very musical. The Xone:32 is great because you can send signal to your own effects. It is an analog A&H small format mixer with three (as opposed to four) bands of EQ, and the trim is hidden on the back panel. I initially disliked this last feature, but it is a limitation that forces thoughtful gain staging. You won’t rely on an average setting, as is tempting to do when there is a knob in plain sight. I recorded into Logic using a Focusrite soundcard.

Can you tell us about the idea behind the mix?

I had two intense and very ecstatic dance music experiences connected with nature this summer. First at the Honcho Campout in rural Pennsylvania during the lunar eclipse. And second during the sunrise at Tuf ‘Til Dawn in Seattle. In the mix, I wanted to capture the communal feelings we experienced of oneness and the overall majesty of those moments. I’ll never forget the ensembles of insects orchestrating Kiernan Laveaux and Father Of Two’s set in the forest; the visceral images of Gaia regenerating that I saw as I closed my eyes in the moments before playing; and the look on the dancers’ faces as they communed with the sun rising behind me in Seattle. I included some of my favorite records on this mix, a few of which have been in my collection from the beginning.

You’re a cofounder of Hugo Ball at Smartbar. Could you paint a picture of the party for us?

Hugo Ball is not like the Smartbar you see in photos. Almost everything is shrouded in opaque black fabric, the DJ and the speakers included. We use as little of the club’s lighting as possible. Sevron, Justin Aulis, Sold and I build our own DJ booth on the edge of the dance floor out of cement blocks (30 to be exact), vibrapods and boards. We call it “The Alter.” The design is based on a photo I found of a similar booth that David Mancuso built for The Loft. You could drive a train by this thing and the records wouldn’t feedback.

The dancing at Hugo Ball is expressive and the music a surreal catharsis in chaos. People are there for an intense experience, and the vibe is open and free. You are greeted by our amazing host, Sophie Bee, a very political and radical trans woman here in Chicago who is a potent source of energy and inspiration on our dance floor. When the crew are not DJing, we hit the floor, worship the speakers and dance next to each other. We are all ravers at heart.

Tell us about the Motherbeat and what it means to you.

There is something in the music. It goes past the intent and personal story of the artist. It is a transcendental message, a language of resonant pulsation. We hear it in nature, for example in bird songs and the insects in the forest. We also hear it in our machines. Trains inspired Bo Diddley’s rock & roll rhythms, and those rhythmic pulsations are foundational in techno as well. A person in the ecstatic state has the power to alter their visual reality with these unenglishable musical messages. Apparently, humans are built to receive and channel these logos into our own expression and creations. If you are intimately familiar with the mushroom, you might have experienced this phenomenon acutely.

At heart, dancing with the Motherbeat is archaic nature goddess worship of the techno variety. My friend named the Motherbeat in 1994 in the moments after a rave, when we experienced all the ambient sound around us as an extension of the party. Specifically, she spoke through an air conditioner. I was a closeted femme at the time and in an existential war with my own body. I was completely lost in the culture’s inadequate models of gender. The records I play for people today, a lot of them were my medicine. Before transition, I would evoke the archetype of the goddess in private and feel connected with my feminine-self through music, dance and adornment. She was my only escape from gender dysphoria and oppression for two decades. I recently wrote this all down on the way to Seattle in the form of a narrative poem, and you can listen to a reading here.

On a deep level, I think the Motherbeat might be Gaia herself—a constant message in the sound around us with the capacity to restore our connection to nature. Calling us to dissolve the ego, reduce cultural models to dust, and revel in the ecstatic. I believe the ecstatic experience is the birthright of every human but the importance of this esoteric tradition has been obscured by centuries of Western rationalism and monotheism. Many modern people only dissolve boundaries through sex and giving birth. And look at the position we find ourselves in as a planet. Rave was an archaic impulse. The KLF burning their money was an archaic impulse. We all need this medicine.

We read that you give lectures on electronic music history and mentor aspiring DJs. How did those two projects come about?

My presentations and mentoring are related to Smartbar’s Daphne program, named after Daphne Oram. A lot of people think the program is merely a month of shows, but we actually workshop all month. I give a talk each cycle about early electronic music history and focus on the stories of a few amazing queer/trans women (e.g. Catherine Christer Hennix and Pauline Oliveros). The first cycle I did was a presentation and equipment demo with the late and amazing Chelsea Faith, AKA Cherushii. Last cycle, Sold presented with me and discussed many of the underground trans and non-binary artists working today, as well as the independent writers covering their work.

I just got started mentoring through a Daphne-related program called Walking & Falling. Sam Kern (Sassmouth), Elly Shook (DJ Kiddo), Ariel Zetina and Jarvi coordinated the program this fall and did a great job exposing a lot of people to the basics of technical DJing (digital and vinyl). Aspiring DJs actually travel to Chicago to come to these weeklong workshops. I am presently giving lessons on vinyl techniques to an amazing trans woman. I feel I am conveying a secret knowledge to her—techniques for the perturbation of time, space and culture—like a shamaness of the past. We have a special bond and it is healing for me on a few levels.

What are you up to next?

I’ve been recording my live music, so the release of that material is on the horizon for 2018. Two years ago I started doing really small shows around the Midwest as a solo live act. The performances are my femme Discordian take on rave and other 20th century spiritual music, using synths (my beloved Chroma Polaris), turntables, and an MPC2000XL.

I am also downright excited to DJ my first sets in Europe this year, starting with a Berlin trip in early January to represent Hot Mass at Ohm with a bunch of my insane Midwest techno friends.