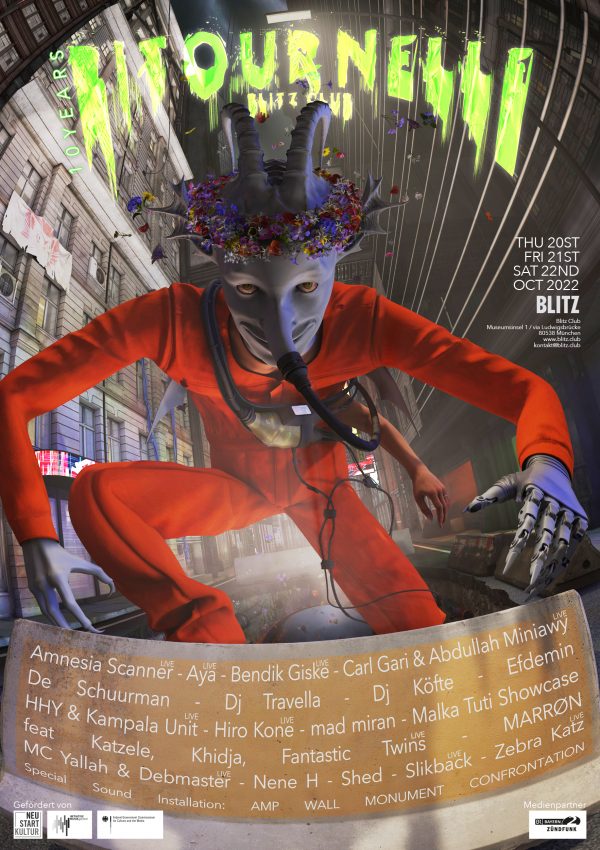 NO PHONES ON THE DANCE FLOORS!

BE WHO YOU ARE!

LOVE IS THE MESSAGE!

Unfortunately, Aya had to cancel her appearance due to sickness. We wish her a speedy recovery and are already working on a new date!

Ten years of Ritournelle Festival shed a light on ten years of music history. From the initial idea of creating a festival for special interest artists from the field of electronic-avant-garde pop music in Munich, a format that unites the potentials of art and club spaces evolved. A festival in which the interactions between the art world and the parts of the club culture open to experimentation and the avant-garde are revealed. A festival for abstract club music, but also subversive, queer aesthetics as well as the underground of non-European continents. And so much more. Music that is now increasingly occupying the feuilleton, but is equally shaping the sounds of mainstream and the big festival stages.

That’s where Ritournelle and Blitz, especially the Blitz Live concert series, meet. Together, we give all the highly inspiring artists, overflowing with creativity, who work and inspire at the junction of the art and club world, a unique space to present themselves. A room of incomparable sonic power and precision, through the Blitz sound system.

On the occasion of the special anniversary, an impressive selection of international artists will perform and highlight the diverse programmatic strains that Ritournelle has developed over time. As always, the evenings start with highly refined live acts and over the course of the evening, the visitors dive deeper and deeper into the world of cross-border, envelope-pushing club music.

On Friday, the program shines with artificial aesthetics like the queer rap icon Zebrakatz. Or the experimental, haunting spoken word artist Aya. With Slikback, the star of African abstract club music. DJ Travella, who reinvented the high-speed Tanzanian dance music sound Singeli by infusing it with cybernetic energy. Or Shed and Efdemin, two of techno’s great contemporary artists. Saturday is dedicated to the power of crossing borders from the most diverse perspectives: Amnesia Scanner with their groundbreaking, post-modern, almost all unifying post-internet sound. The artists of the German-Israeli Malka Tutti label showcase with Fantastic Twins, Katzele and Khidja on the PLUS floor. And finally, contemporary techno heavyweights Marrøn and Nene H. Just to name a few. Thursday, the opening night, is dedicated to and curated by Munich local heroes Carl Gari & Abdullah Miniawy. Celebrated internationally for their mix of

Post-Techno, Drone, Dub and Kraut, the band will play alongside artists such as Hiro Kone and Bendik Giske.

Ritournelle is and remains a festival that challenges expectations and habits and enables new perspectives. A festival for everyone who is open to the potentially life-changing, cross-border experiences of club culture, the avant-garde, but also the art world.